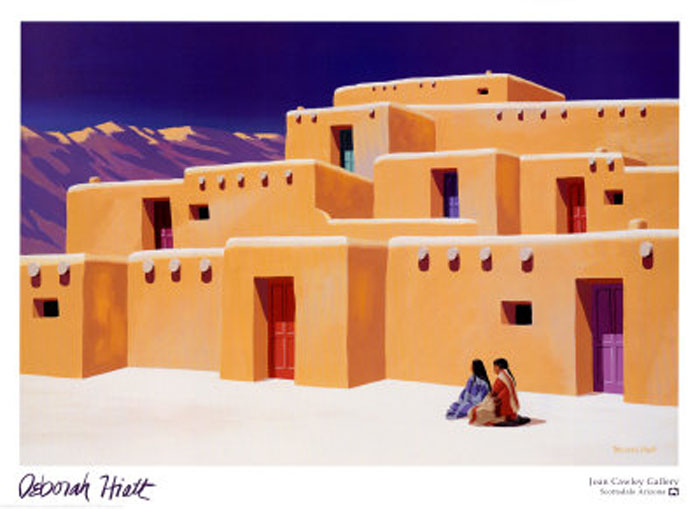 In New Mexico is a rich culture that blends together Anglo, Hispanic and Native American elements in a fascinating way. The area is rich in history where dramatic and often times tragic historic events, shape the modern day reality. Among the earliest accounts are tales of refuge for the Anasazi and Mogollon peoples from the surrounding area to the Rio Grande valley. This is supported by archaeological evidence. Clans and groups of people wandered across the land seeking shelter and meaning in a new locale. Highly religious people with a culture steeped in secrecy and egalitarianism.

With the arrival of the first Spanish expedition north led by Francisco Vázquez de Coronado in 1540-42, their culture took a nose dive into more extreme form of mysticism. Spanish authorities sought to eliminate traditional culture with persecutions and strictly enforced oppression. The main tool in that regard was the Catholic Church. Zealous priests did their best to sniff out for extermination any elements of traditional beliefs and resistance to Spanish rule. The aim was to create a docile population better suited for control and the menial labour required to enrich the Spanish elite.

In light of all that pressure, it would have been easy to just abandon their culture and embrace the values of the Christian faith and the European culture package that came with it. But, the villages along the upper Rio Grande, nowadays called Pueblos, chose a different path to cultural survival. Highly religious and conservative they hid all visible trace of their religion in secret rooms with select few individuals possessing the secret knowledge of customs, religious expression, ceremonialism and historic events. Individualism was scorned with members being pressured to observe the values of being a nobody, an unidentifiable part of the cultural grouping. That means that no one was allowed to break the fold in any way and stand out. Such suspicious behaviour was treated as a threat to society and dealt with accordingly. The villages were controlled by a governor, village council and committees. The patriarchy that developed ensured that despite so many religious female deities and mother earth elements; in reality the males governed with females taking the back seat.

The villages or as they are more commonly called, the Pueblos, took this religious and conservative measure with a varying degree of strictness. Some have started to open up to the outside world while others remain as closed and forbidden as they have been for at least 500 years. With openness comes flooding onto the surface many social ills kept under the wrap for centuries. Domestic violence, oppression of individualism, envy, witchcraft accusations, rampant gossip and various inter-group violence are among some of the things that need to be treated and addressed properly. If the pueblos are to survive into the future drastic changes are necessary. These changes will alter social norms and values but it is unlikely that cultural practices will suffer.

This defensive mechanism of isolation, conservatism and suspicion served to carve out a third path for the Pueblos. With the Spanish arrival the Native Americans were faced with only two choices, extermination or enslavement. Enslavement meant broken up communities, abandonment of traditional culture and identity and life as either a slave or virtual enslavement as the lowest social class in colonial Spanish society devoid of any meaningful rights.

To complicate matters more, there are spoken at least four languages in the Pueblos along the Rio Grande, three of them related Tanoan languages, Tiwa, Tewa and Towa, with the fourth, Keresen, a language isolate. Close by are also Dinés (Navahos) who mixed with Puebloan peoples when they migrated south from Canada to create the Diné Nation of today. Jicarilla Apaches with other bands of Apaches in New Mexico and Arizona add to this pot of fascinating cultures in the Southwest.