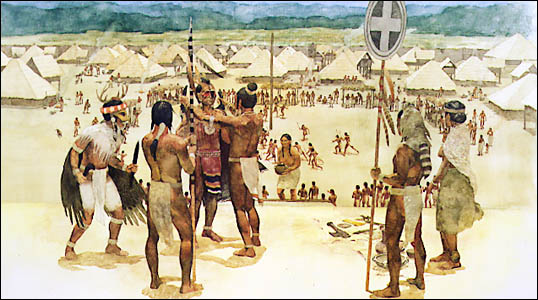 The Muskoke is made up of survivors of groups of Kasihta (Alabama-speakers), Tuskegee (Koasáti-speakers) and Coweta (Hitchiti-speakers) origin, speaking languages of the Muskogean Language Family. They were of different cultures, Moundville (Alabamas), Dallas (Koasátis) and Lamar (Hitchitis). They joined in a confederacy while they were gathered along Okmulgee River in the late 1600s. An important element in the formation of the confederacy are the Tukabahchee who may have been of Shawnee (Algonquian-speakers) origin. Together they formed a new distinct group that was known by many names, but the most well known is Muskoke (Mvskoge, Muskogee), name of unknown origin and meaning by which they are known today. As diseases and conflicts continued to decimate their societies, more groups gathered around them to seek strength in numbers. Among these groups were Yuchi, Siouan, Natchez and Timucua peoples fleeing their homelands. The lingua franca however remained the Muskoke tongue, an amalgam language of the first original groups. Later, groups dissatisfied with growing cultural and political influences from the surrounding Anglo-society, began moving into Florida to form their own independent villages. That area had been left vacant by slave raids made by among others, the Muskokes themselves. These groups later became known as the Seminoles who fought a contracted war with the United States.

Muskoke location in the 16th century.