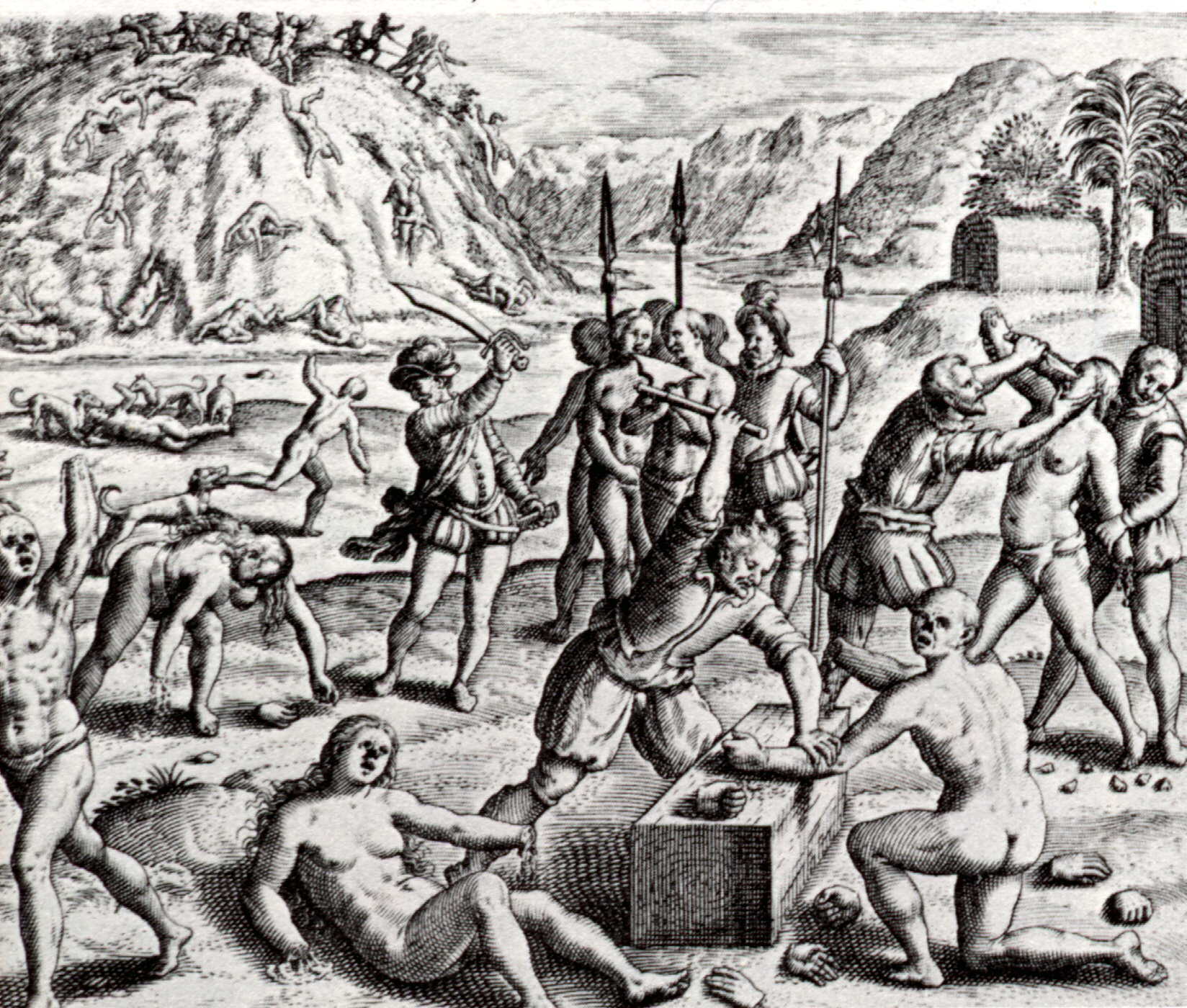 Convention on the Prevention and Punishment of the Crime of Genocide, adopted by the United Nations General Assembly on 9 December 1948 as General Assembly Resolution 260. It entered into force on 12 January 1951.

In the present Convention, genocide means any of the following acts committed with intent to destroy, in whole or in part, a national, ethnical, racial or religious group, as such:

Elements of the crime

The Genocide Convention establishes in Article I that the crime of genocide may take place in the context of an armed conflict, international or non-international, but also in the context of a peaceful situation. The latter is less common but still possible. The same article establishes the obligation of the contracting parties to prevent and to punish the crime of genocide.

The popular understanding of what constitutes genocide tends to be broader than the content of the norm under international law. Article II of the Genocide Convention contains a narrow definition of the crime of genocide, which includes two main elements:

The intent is the most difficult element to determine. To constitute genocide, there must be a proven intent on the part of perpetrators to physically destroy a national, ethnical, racial or religious group. Cultural destruction does not suffice, nor does an intention to simply disperse a group. It is this special intent, or dolus specialis, that makes the crime of genocide so unique. In addition, case law has associated intent with the existence of a State or organizational plan or policy, even if the definition of genocide in international law does not include that element.

Importantly, the victims of genocide are deliberately targeted – not randomly – because of their real or perceived membership of one of the four groups protected under the Convention (which excludes political groups, for example). This means that the target of destruction must be the group, as such, and not its members as individuals. Genocide can also be committed against only a part of the group, as long as that part is identifiable (including within a geographically limited area) and “substantial.”

United Nations Office on Genocide Prevention and the Responsibility to Protect, 2019, https://www.un.org/en/genocideprevention/genocide.shtml

For the past decades scholars in the US have argued whether the treatment of Native Americans can be accurately defined as a genocide or not. To most people outside and increasingly on the inside of the US, it is rather obvious that a genocide on a massive scale has taken place. That genocide began with Christopher Columbus in 1492 and is still taking place today in 2019. It is therefore a massive and seemingly endless genocide that has been ongoing for 527 years. It is the longest running genocide in human history.

The UN definition of genocide quoted here above proves that without any doubt. The perpetrators are the Euro-American colonizers and later also their henchmen, mixed race people of European and Native American extraction. The list of the guilty ones does not end there as the genocide is still ongoing in many areas, especially South America. The sufferers are the original inhabitants of North and South American, usually called Native Americans. These original inhabitants spoke thousands of languages of many unrelated language families and had a history and culture that had evolved for millennia.

And, it is not only the US that is guilty of the crime of genocide. Other modern states in North and South America are guilty of the same. Genocide, slavery, ethnic cleansing, cultural eradication, oppression, harassment, exclusion, denial of basic human rights, murder of prominent persons and others that stand in the way; the list is endless for these states of the crimes committed in the past, the present and sadly in the future too.

The UN definition is comprehensive but altogether does not embrace all aspects of the various forms of genocide. Genocide can be spurred on by a political agenda, a politically sanctioned genocide, aimed at specific groups of people. Here we have a top-down approach that state leaders want society to take. A centralized plan is put in motion that follows the logic and the scheme initiated by state forces. State actors are thus responsible for committing most of the violence. The Holocaust during World War II is an example of this kind of genocide. The Nazis wanted to exterminate not only Jews, but also the Roma people, disabled people and those mentally ill. Given time this kind of genocide driven on by state institutions can evolve into the second kind of extermination of unwanted groups of people.

With time the politically sanctioned genocide becomes socially accepted. The logic takes root that unwanted social groups or weaker strangers are second class people or not even human at all. They can thus be destroyed without much afterthought or guilty conscious, as easily as plugging weed in the garden. That is what I call a socially sanctioned genocide. In such instances the society has convinced itself of its own superiority versus minority groups that either live inside their own state borders or on some coveted territory outside of it. The superiority ideas trumpeted by their leaders have become mainstream and serve as a behavioural model on how to treat ‘the others’. It is therefore socially accepted, the way to think of others. This world view is also trumpeted in media outlets. The general public freely participates and without much coercion. Agents of the faith also confirm, encourage and absolve any doers of responsibility for their actions. This model combined with greed then serves as a vehicle with which to treat ‘those who do not belong, the savages’.

The Native American Genocide is an example of this along with for instance the Armenian Genocide, and countless others around the world. In North America the vast majority of frontiersmen, hunters, trappers, traders, settlers, missionaries and soldiers truly believed in this ideology. To them it was ‘the manifest destiny’ that white people should inherit the American landscape and push away its indigenous inhabitants. The Native Americans should be exterminated or showed aside to unwanted lands.

When we look at the actions of these people, we can see that frontiersmen, hunters, trappers, soldiers, missionaries and settlers, whose descendants now populate the choicest territories in North and South America, are guilty of all five acts of the UN Convention of Genocide, that is:

‘killing members of the group’ – waging wars of conquest and extermination, massacres, slaving raids, bloody and merciless gold-hunting expeditions and various other extermination campaigns against Native Americans from 1492 to the present day to steal their land and resources. All violent conflicts waged on Native Americans could easily be described as falling under this genocide act;

‘causing serious bodily or mental harm to members of the group’ – murder, torture, mistreatment, oppression that in many instances continues to this day. In recent decades the conflict in Guatemala and the present situation in Colombia where just recently indigenous leaders were murdered by paramilitary right-wing groups. The situation in Brazil is also critical with the newly elected president Jair Bolsonaro threatening to roll back hard-won rights by indigenous groups and cut down the Amazon rainforest. This has already started an invasion into Native American communities by heavily armed miners threatening to kill natives who stand in their way;

‘deliberately inflicting on the group conditions of life calculated to bring about its physical destruction in whole or in part’ – the reservation system was in large part intended to do just that, what warfare could not achieve, concentration camps for Native Americans would finally finish them off. Food and other basic aid was deliberately withheld from the camps as many whites were truly convinced that within a few years there would be no more Indians left;

‘imposing measures intended to prevent births within the group’ – there are many instances of this, just recently in Peru 1996-2000 where at least 294,000 indigenous women were sterilized without their consent or knowledge. Tricked into what was to be a normal and routine health check-up, but later discovering the true horror of what had be done to them. Not since Nazi Germany do we have in world history instances of so many victims of this crime. It is worth noting that the political party that was in power during this time is still in power in Peru;

‘forcibly transferring children of the group to another group’ – when Native Americans had been forced to the concentration camps later called reservations, church groups with the aid of the authorities forcibly separated children from their parents to send to boarding schools far from home, the intention was to exterminate the ‘savage’ Indian to gain a ‘civilized’ citizen, children were banned from speaking their languages, meeting their parents, had to adhere to a strict dress code, their sacred hair cut. The result was decades of mistreatments as paedophiles, sadists and other mentally sick persons got a free hand to do what they wanted to the children, often with the full knowledge of church authorities who actively tried to hide the truth about the boarding schools. Out of these boarding schools came often traumatized and broken individuals, suffering mentally from the horrendous experience that they had to endure.

But it is not only in the Western Hemisphere that we can find states guilty of the crime of genocide. Turkey has a long and bloody history of committing genocide, massacres and ethnic cleansing. The Armenian Genocide is perhaps the best known. It was committed by Turkish citizens as well as government agents, both spurred on by the nationalist government of Ataturk. It is not only genocide that Turkey has committed but also ethnic cleansing. Greeks were expelled from Turkey after the First World War and more recently Kurds from Afrin in Syria in 2018. Besides that, the Kurdish culture and identity in Turkey is actively being exterminated today by state actors. The Kurds in Syria are constantly being threatened with extermination by Turkey. Paranoid Turkish leaders full of nationalistic and religious conservative ideas look upon the self-governing territory that the Kurds control in northeast Syria in the ongoing civil war there, as an existential threat to the Turkish state. The Kurdish territory in Syria is a bastion of secularism where tolerance, liberalism and equality are the foundation of their self-rule. Such ideas are contrary to the fundamentalist psyche of conservative Turks. To them patriarchy and strong adherence to the strictest interpretation of Islam are the main virtues. Democracy is also scorned as faith-based leaders of the state or theocracy is the ultimate goal of their movement.

Reséndez, Andrés, 2016. The Other Slavery: The Uncovered Story of Indian Enslavement in America. Boston, Mariner Books.