Walk in Beauty in Dinétah, the Navaho IR

When entering the Navaho Indian Reservation (Dinétah in the Navaho (Diné bizaad) language) at the picturesque Marble Canyon in Arizona, one meets sale booths with a great variety of locally made hands and crafts, ranging from silver necklaces to clay pots and figurines. The fine ladies managing the booths are informative, respectful and patient. No one tries to pressure the customer to buy anything which is a great relief. When confronted with intrusive salespeople I turn away no matter the beauty for sale. In my case, I find it disrespectful and highly annoying for sellers to pressure a customer to buy their stuff. Luckily that is not the case on the reservation. We bought from all of the sales women.

One of them was kind enough to give us the phone number of her brother and his wife. The brother is a local medicine man willing to conduct the Blessingway Ceremony (Hózhóójí) for strangers like us. The Blessingway is one of the most beautiful ceremonies there is. Meant to harmonise, heal and create love and peace, it is part of the Diné creation story, Diné Bahane. Unfortunately we did not have time to go through with our plans regarding the ceremony but will surely come back sooner rather than later to make this happen. We have his number on file however for later usage.

Deciding to spend the night at this beautiful place, we crossed the Navajo Bridge back again into bilagáana (white people) land on the other part of the Colorado River as this was the only lodging in the area. Both sides of the river in Marble Canyon however seem to be inhabited mostly by Diné as the Navahos prefer to call themselves in their own language. It is often said that arid landscapes like the ones close to the reservation, are desolate and unfriendly. Many parts of my home country in Iceland could be described in similar terms. Yet, I find this landscape extremely beautiful. It has it’s own terms and magic. Although difficult terrain in terms of water and agriculture, it has it’s potential nevertheless. As in Iceland, tourism is one of the options. This was evidently the case in Marble Canyon. On the road to Tuba City the next day, driving through the magnificent Painted Desert (Halchíítah), we discussed how fun it would be to go horseback riding in this landscape. This seemed not to be possible however as we saw no sign of any place offering such a service. Perhaps next time though.

Tuba City (Tó Naneesdizí) seemed not be a flourishing place. Boarded up windows and abandoned buildings marked the place. The majority of the 8,600 residents are Diné with a minority Hopi. We found there the splendid Navaho Interactive Museum, where one explores the journey Dinés take through life. Four monumental directional symbols divide the Museum into four quadrants where one will enter in the East and move to the South, West and North. Each quadrant is an introduction to the land, language, history, culture and ceremonial life of the Diné who numbered more than 330,000 people in 2015. That makes them the second largest Native American ethnic group in US and Canada. The largest Native American ethnic group according to official US government census records are the Cherokees with 760,000 people. 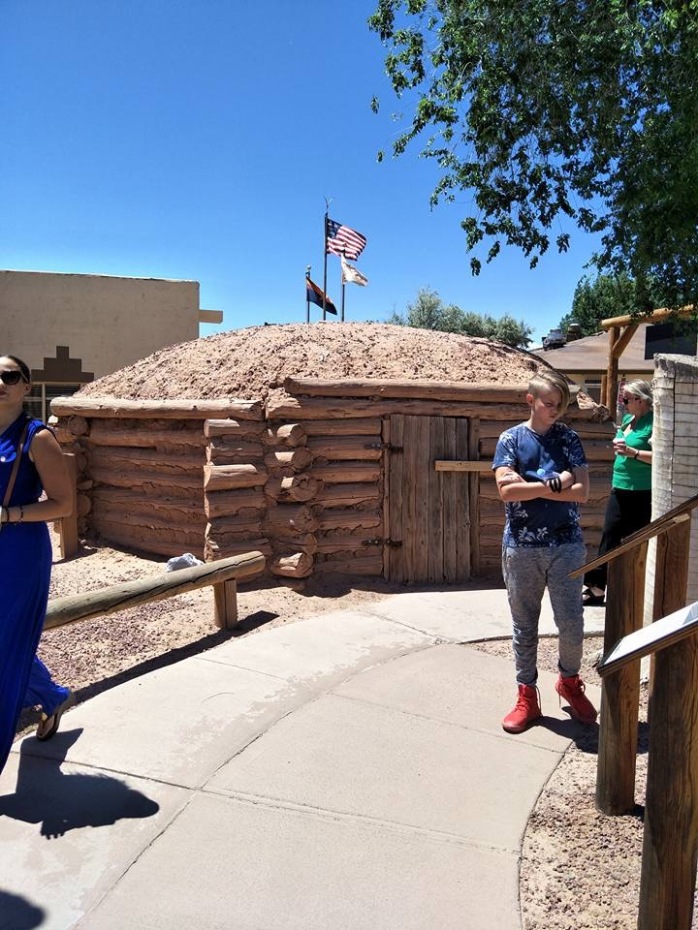 Driving south towards Flagstaff I realized that the Diné could turn their territory into a more flourishing country if they were just allowed to manage fully their own affairs. As it is today however it surely has it’s charms and breathtaking beauty. I can’t wait to come back.

← Loosing a Hair, Loosing a Culture Or, the Lakota Boy who Lost his Hair
Ville de Québec – Histoire et Culture →